Six weeks later the vertical grow pots are doing fantastic. There is so much space this is saving and running on my 650 litre system does not increase the load on this system. This system is still running at 50% capacity in my opinion. I can easily add another few more vertical grow pots and two more regular grow beds. Periodically I have been adding a little seaweed extract which seems to take care of some of the micronutrient deficiency. Compost tea is the next addition which I will be trying soon.

Inside the Green house

Here are a few pics for the green house
I now have a 650 litres aquaponics system which is doing well powered by over 100 fish. This system is been around for over a year and half now, during which time there was a lot of refining done to get the water flow work properly.
Recently I have added the vertical system to this which will be activated soon. This will up my productions capacity by 48 individual grow pots. With a little modification to the plumbing this vertical system is now integrated to the main 650 litres system.
The 250 litres new system is also just setting in, the nitrification cycle has just started and this system is powered by over 20 fish.
Wicking beds are doing good and I have had a few good harvest from this. So I have added a few more smaller wicking beds. Also this wicking bed gets water from my swirl filter which gets cleaned weekly. 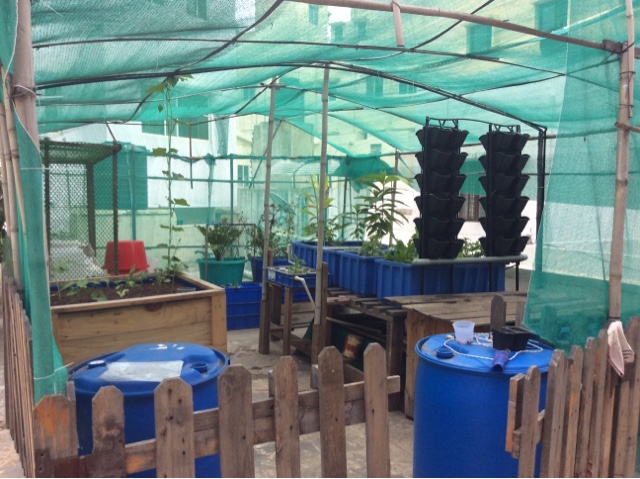 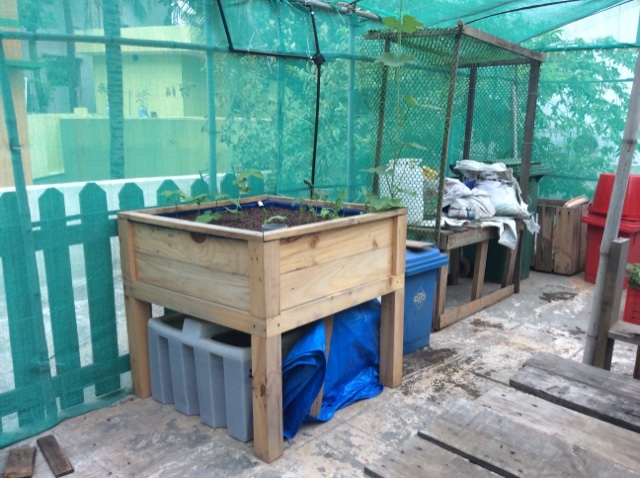 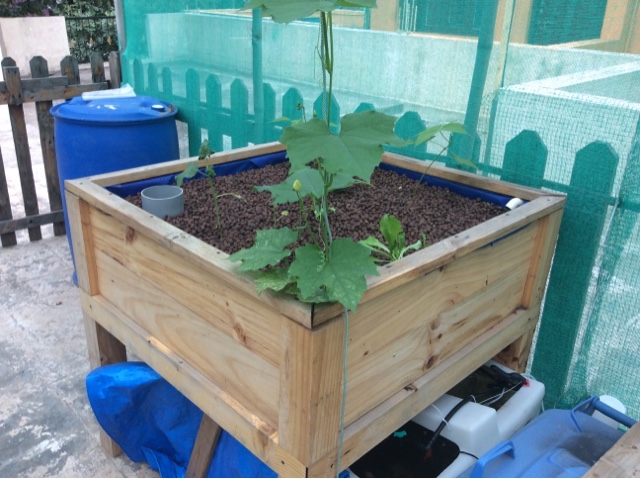 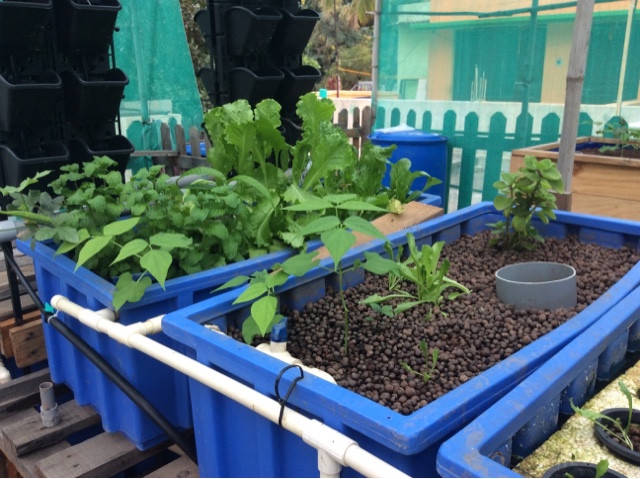 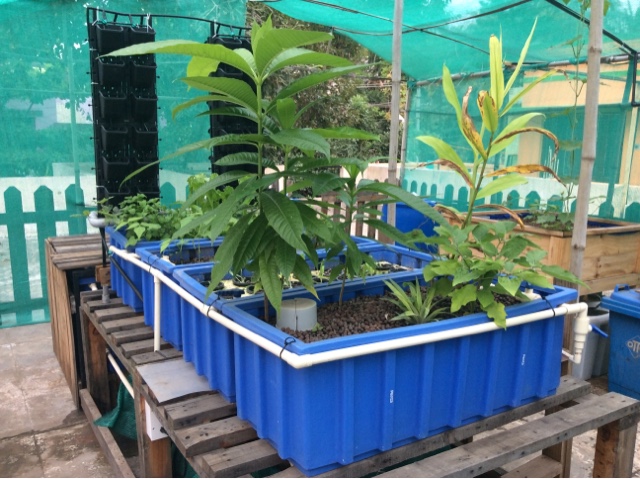 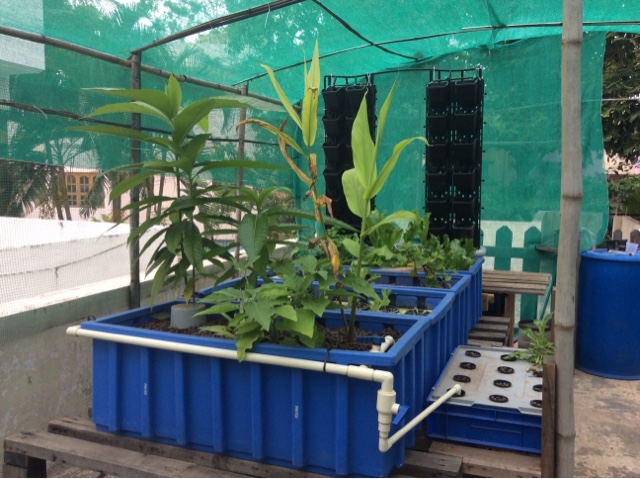 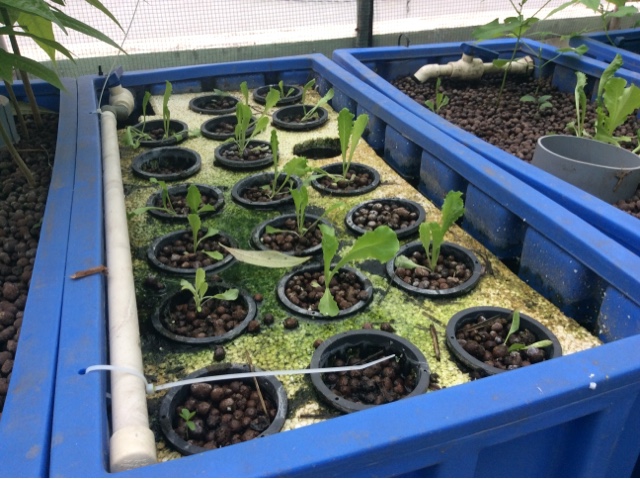 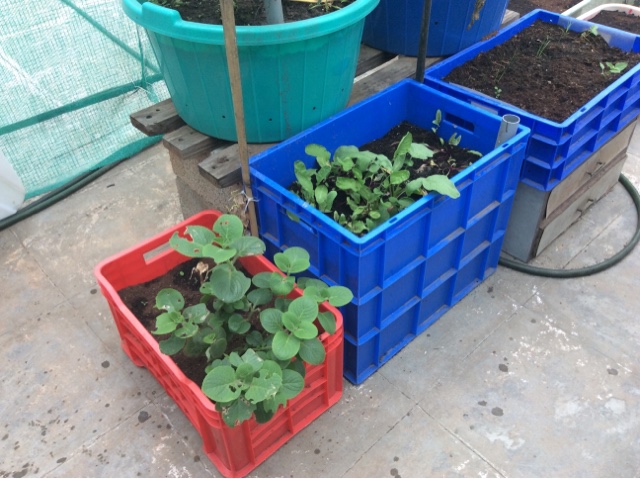 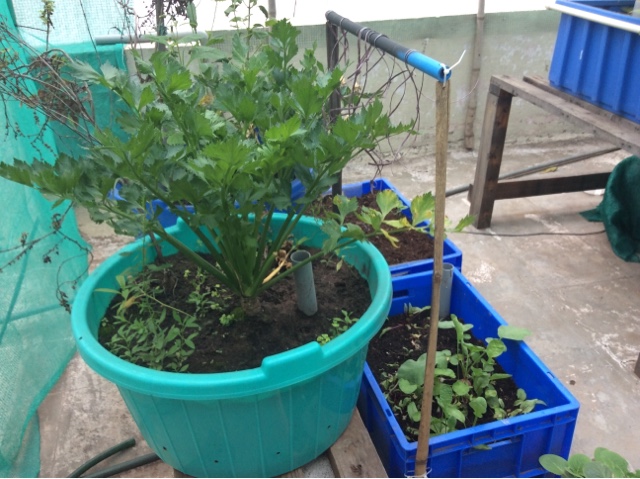 The new 250 liters Aquaponis system was in the making for a while and now its ready. This system was planned to reduce transportation and assembly time. The current system is a direct drain to the fish tank, where the growbed is directly on top of the fishtank.

The dimension of this system is 900 x 900 mm x 300 mm and the fish tank is a 300 liter capacity loft tank that is readily available in the market.

The wooden framework was developed keeping in mind the outdoor conditions and was treated with a PU coat (weather proof sealant). 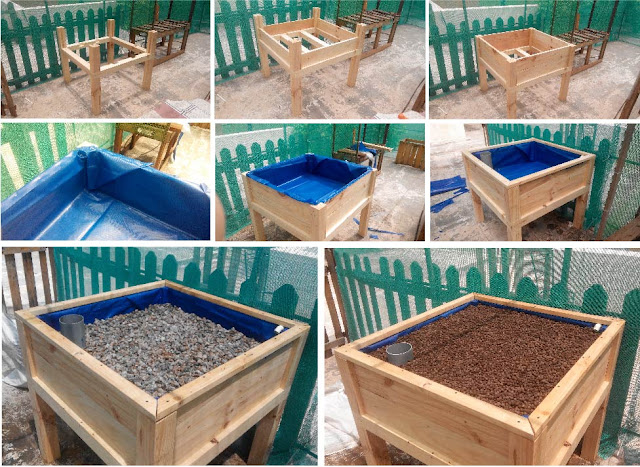 For this system i started cycling with fish.
the formula i was following in the past was the same i used here. So what i did was once the system was fully plumbed and the water filled in the fishtank, i ran the system for three days without fish.
Then on the 4th day i added 5 goldfish, and did a water test. After the first week i added another 5 fish and every week gradually i started adding more fish.
The first few weeks you will notice the PH reducing and the ammonia level slowly building up .. once you see the ammonia building up .. its time to add some seeds so that there will be takers for the nitrate when the bacteria start converting the ammonia into nitrite and then nitrate.

Here are the results from the testing that was done in 8 weeks.
you can see the progress gradually.

This is a 400 liter barrel ponics that i built with two 200 liter barrels interconnected for the fish tank and 2 barrels cut in half to form the 4 growbeds. For the sump tank i used a 300 liter loft tank.
The system was set up some time ago. The build was simple with 40 mm square section of treated pine that was put together with a clever load bearing design the barrels sat comfortably on the frames. 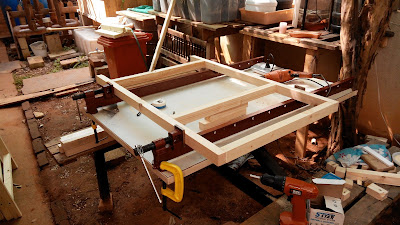 The fish tank was placed strategically under the overhead tanks of the house to avoid direct sunlight and this gives the FT plenty of insulation from the elements.
Bell siphon was put in place and the plumbing was done using 19 mm cpvp pipes with control valves at every water exit point.
Once the system was all hooked up we ran the system for about 3 days for all the dust etc get settled down at the bottom of the growbed and for the water to get cleared. 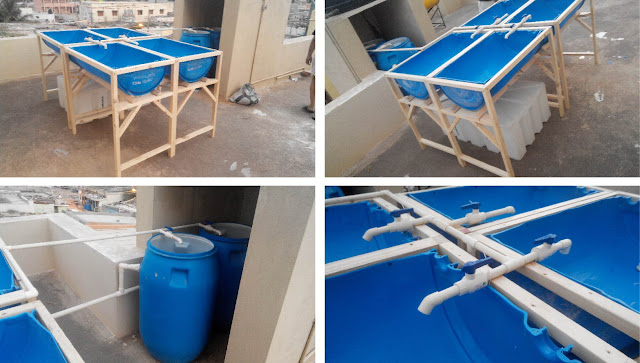 3 days later I introduces 10 gold fish. This is very less number of fish for this size tank, but this was done because I was looking at cycling this system with fish. 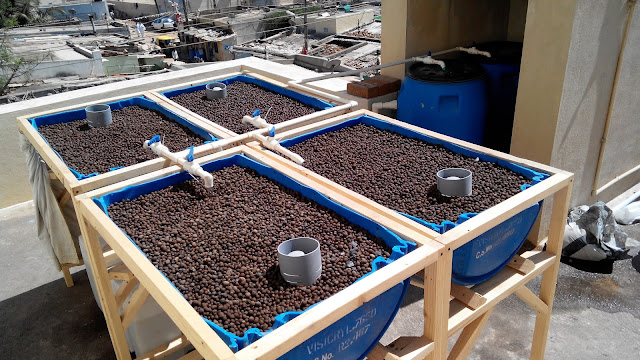 Then I ran the system for a week and added a another round of 10 gold fish. By now a few seeds was also thrown into the growbeds. It took almost 6 weeks for the nitrogen cycle to get established. During this time a few tweaks was done to the bell siphion upstand to get the flood and drain cycle to set well. 8 weeks later the system was running fine and in three months time the system was well set and the tomato plant were already starting to fruit. 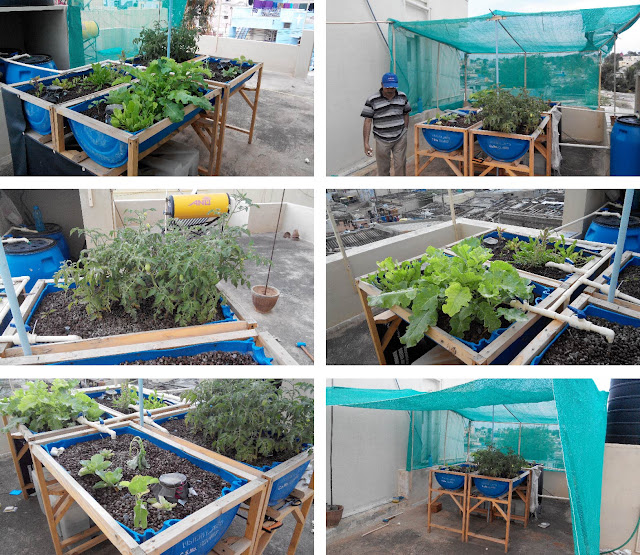 How does Aquaponics work? - The basic blue print 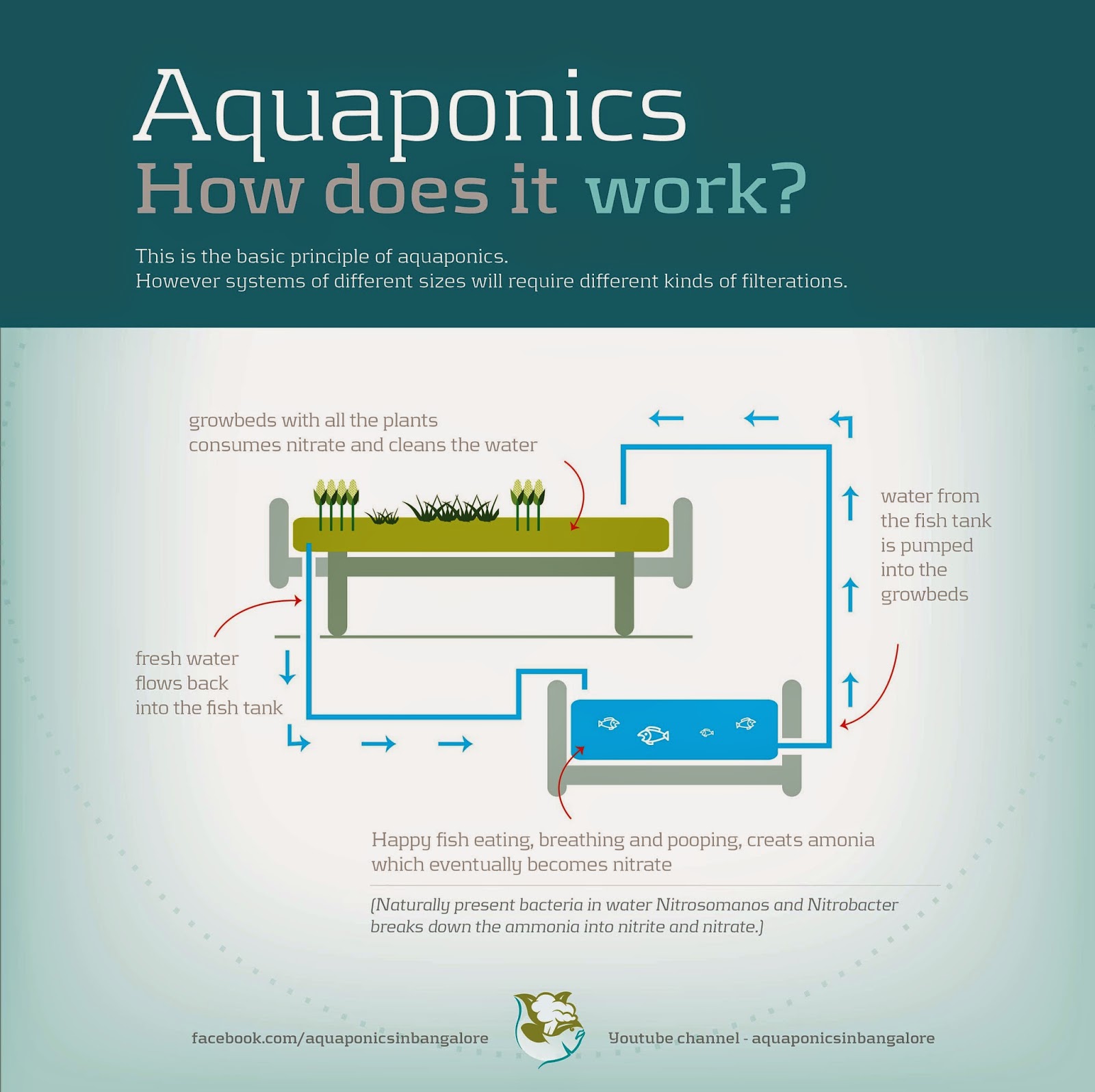 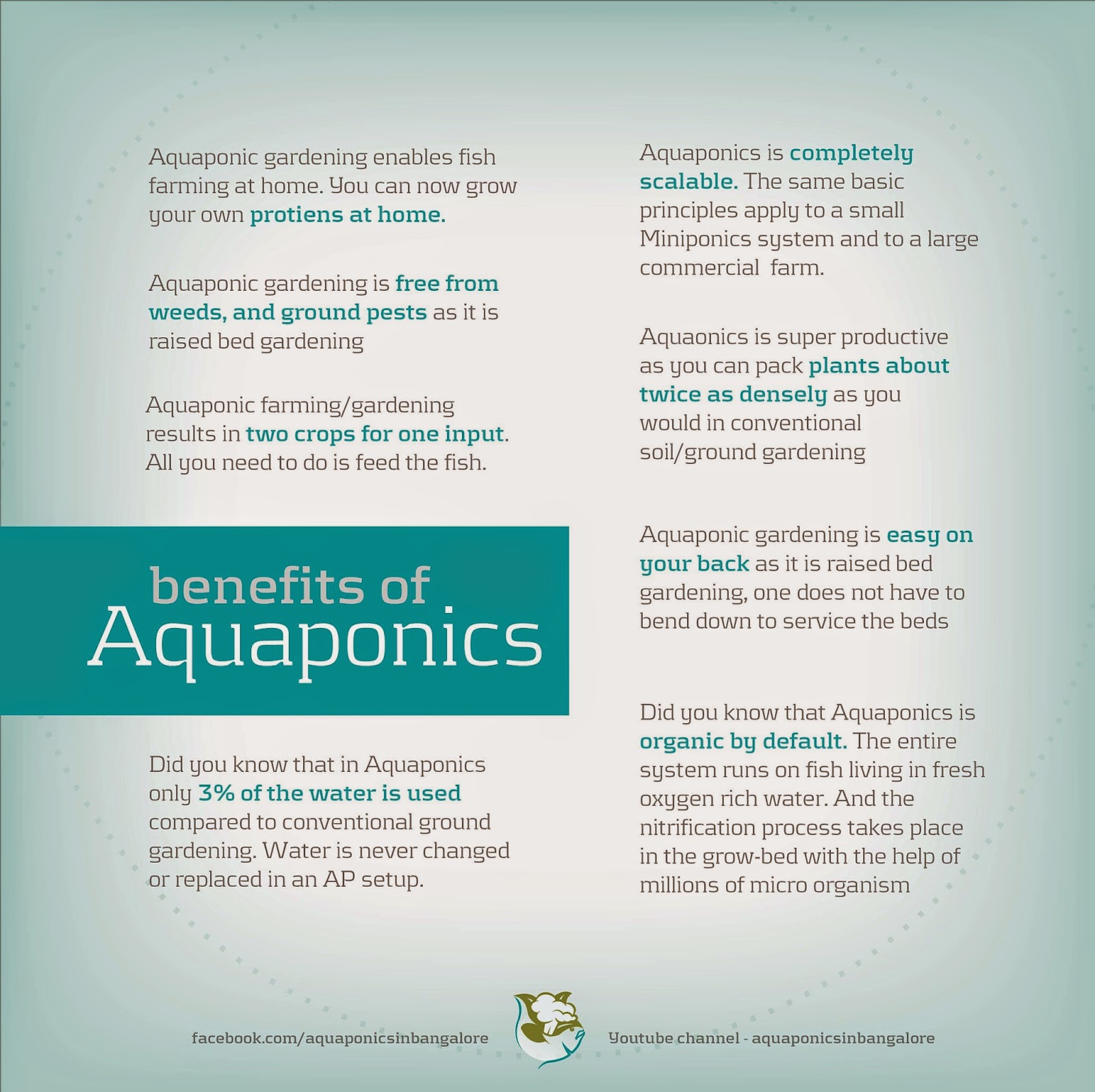 What type of growmedia not to use

A lot of people have been asking me if we can use smaller pebbles, sane or cocopete for the grow media in an aquaponics system.
So i decided to give it a try.
I used small pebbles in this experiment, the pebbles were about 5 mm in size. easy to handle and the system started to grow well. 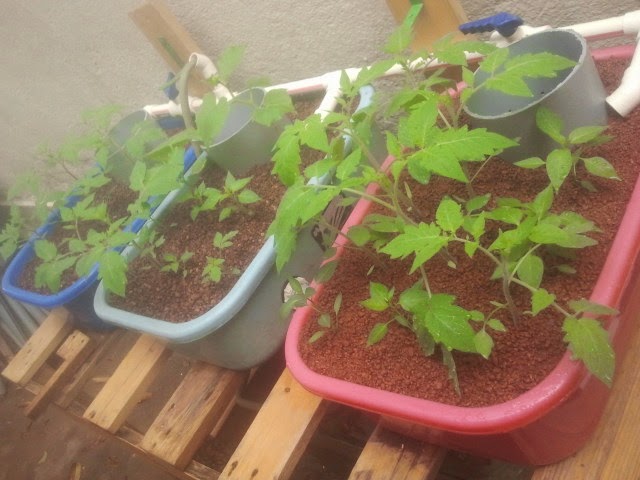 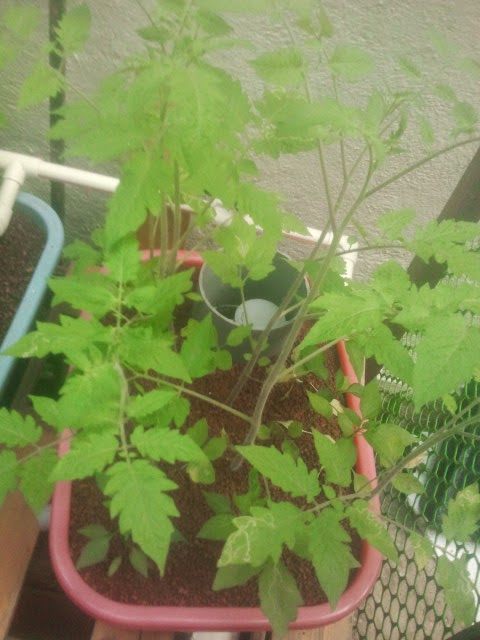 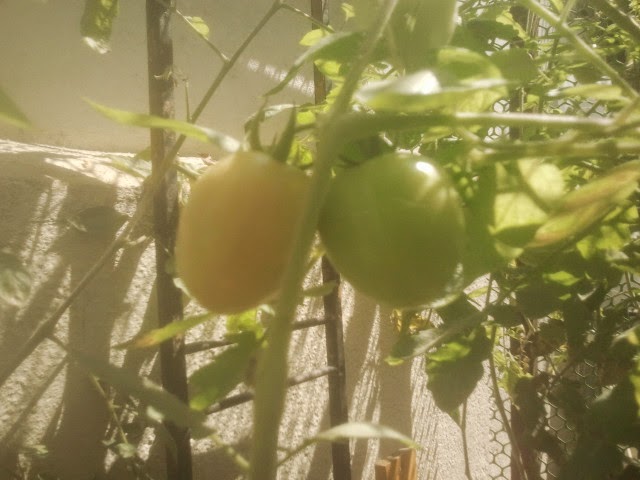 Well as a lot of experts from various online forums did mention that this will not work.
And after a few months, tomatoes were happily growing until one day i noticed that the water flow was not the way i would have liked it to be.
This is precisely 5 months  after i started the system and the problem started.

Root clogging, had caused the problem .. the roots were really big and used up all the space between the small pebbles and there was no space for the water to flow. Also the flood and drain did stop working and this adds to the supply of oxygen the to roots to be cut off. 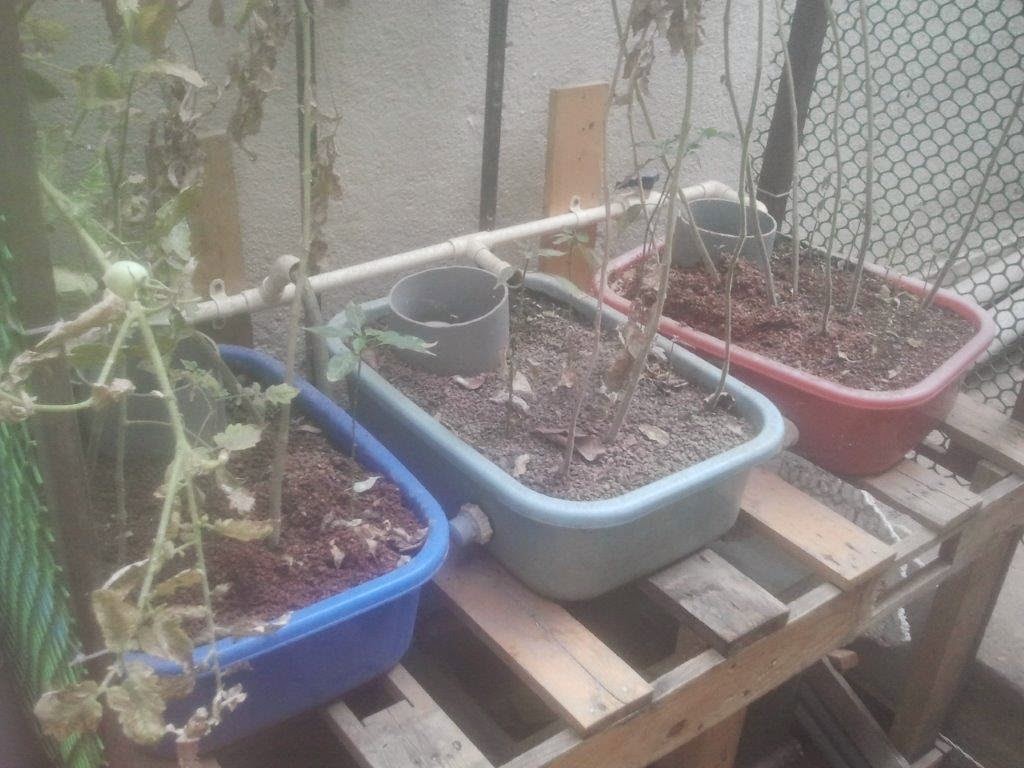 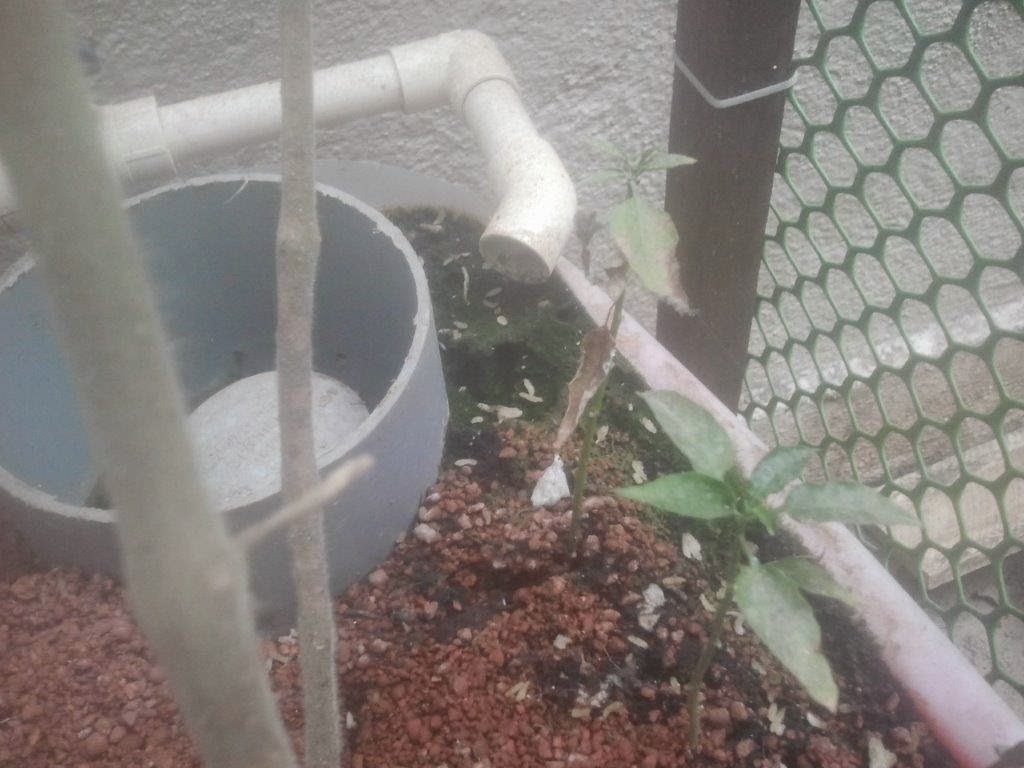